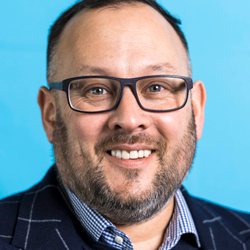 Founder and CEO of the Pumping Marvellous Foundation

“Failure is not an option… how about we think of it like this: success is an option,” says Nick Hartshorne-Evans, the founder and CEO of the Pumping Marvellous Foundation, the UK’s Heart Failure charity.

Training our mind to see and experience success is an essential component of winning. In 2017, I uttered the bold words that this was heart failure’s decade. I always build margins of error into whatever I do.

For many years, there has been a lack of investment in heart-failure services; not just in the UK, but across Europe and the Globe. This is not a reflection on the thousands of dedicated heart failure specialists; this is a reflection on “who shouts loudest” which then prioritises certain conditions for people in power. If you look at it from an outsider’s point of view, why would you invest in heart failure? Have you ever invested in failure? You are brave if you have.

Let’s look at it from a different angle. Company names are essential; they generally shout your brand and how you want the outside world to see you. How many companies are registered in the UK at Companies House with the word ‘failure’ in their registered title? There are nine listed. Now let’s look at how many companies at Companies House have the word ‘success’ in their registered title. There are 279 listed. The word failure is not widespread. It’s meaning alone doesn’t facilitate buy-in or demonstrate optimism or good outcomes.

Positive change needs to happen for the 1 million people in the UK.

Do people really know what heart failure is?

Heart failure is a debilitating condition that has a significant burden on people’s lives. It impacts nearly 1 million people across the UK and has a worse prognosis than most forms of common cancer. However, people don’t know what it is and what the symptoms are.

Heart failure is still not on the agenda and only occupies one paragraph in the 136-page NHS Long Term Plan published earlier this year.

Progress for 1 million people in the UK

We have many successes to shout about. We are seeing the green shoots of real positive change. We are all working together, working to beat heart failure, and we need you to support us. We want to reset attitudes towards heart failure and bring it to the forefront of the health agenda.

Having been inserted into this conversation at 39 (with a diagnosis of heart failure, nearly dying, being cared for and treated back to some form of normality by people doing the right things); I know this is the time to strike. This is the time to work as a team and change the paradigm and move the needle to success. Never have we had a better opportunity.

As a friend of mine said, “We know what good looks like; we just need to do it.”

Nick Hartshorne-Evans is the founder and CEO of the Pumping Marvellous Foundation, the UK’s Heart Failure charity. He founded the charity after his experiences of being diagnosed and living with heart failure. The charity now runs the largest heart failure patient communities across social media and supplies over 100,000 pieces of patient information to over 200 NHS teams every year. The charity is a real success and is a global leader in patient to patient support and communication in heart failure.