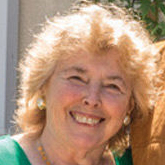 After the usually active Brenda Walker began experiencing breathing problems, she was diagnosed with heart valve disease — a condition that was simply corrected with a TAVI procedure.

A sudden difficulty in walking

Ex-head teacher, ex-senior lecturer and publisher Brenda Walker, 84, has been extremely active all her life. “I always have to be doing something,” she admits. A keen gardener and lover of the arts, she still teaches English occasionally and loves visiting her children, grandchildren and great-grandchildren who live in various places around the world, including Canada, Norway and France.

When she was 75 – an age when most people are taking things easy – Brenda started a doctorate on the new dynamics of ageing. “I’d been working on my PhD for a while when I suddenly found it difficult to breathe, climb stairs or walk any distance,” remembers Brenda. “My ankles were swollen, too.” Alarmed, she visited her GP, but was told her symptoms didn’t indicate a heart problem.

Not content with this, and with her breathing worsening, Brenda went to a consultant who diagnosed her with aortic stenosis, or heart valve disease — a condition that affects the flow of blood through the heart and is potentially fatal. “The consultant listened to my heart with a stethoscope — whereas the GP hadn’t,” says Brenda. “That made all the difference and I was immediately sent to hospital for various tests. “I was told that I was a high-risk patient and would be a candidate for a newer procedure called TAVI, short for Transcatheter aortic valve implantation. When they explained how the procedure worked and that is was less-invasive and would lead to a quicker recovery, I was happy to agree to it.”

I still think it’s amazing that I can almost run up steps now!

With this procedure, an artificial replacement valve is inserted into the heart using a balloon catheter, either via the main artery in the groin or via a small incision on the side of the chest. Brenda was also advised that if she did nothing, she could only expect to live for another two-and-a-half years.

“I didn’t really want surgery,” says Brenda. “So I in a way I was glad that I had the opportunity to have TAVI, which the surgical team carefully explained to me with the use of diagrams. I was desperate to finish my PhD and knew that the big benefit would be shorter recovery time.” Brenda, now based in Somerset, had the procedure under general anaesthetic at Glenfield Hospital in Leicester six weeks after her initial diagnosis.

Fast recovery time and no symptoms

The results were miraculous, she says. Her breathing problems stopped, she didn’t need medication of any kind and her recovery time was almost instantaneous. In fact, Brenda only spent two-and-a-half days in hospital — and a day after she arrived home, she took her children shopping.

“I’ve had the valve for seven years, and I’m still very energetic,” says Brenda, who finished her PhD five years ago, has since taken correspondence courses with a local horticultural college, joined a swimming club and recently taught a wellbeing movement class with 14 people in the local village hall. She’s also been working on the design of her garden and is looking forward to a trip to Prague. “I still think it’s amazing that I can almost run up steps now,” she says. “My partner, David, who is 85, says: ‘She used to trail behind me. Now look at her!’”

Brenda’s advice to anyone experiencing the same symptoms is to insist that their GP listens to their heart with a stethoscope. “I thought my problems were just down to ageing,” she says. “So I’d recommend getting advice from a specialist. And don’t delay, because you never know. It might be the sign of a serious problem that can be easily solved.”