Taunted and teased at school, many who suffer from skin conditions never recover. Luissa Burton hopes that sharing her experience will allow others to plot a way through the clouds. 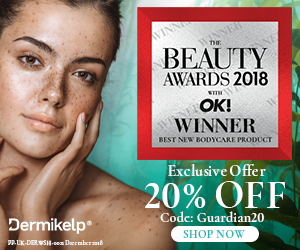 This year, Luissa Burton became the first UK winner of the Miss World Europe title in the competition’s history.

She has modelled for a decade, during which time she has struggled with her skin condition; psoriasis. Throughout the Miss World Europe competition, Luissa was completely covered in the psoriasis that has had such an enormous effect on her life to this point.

Appearing in a bikini and openly discussing the long-term, mental effect the condition has had on her life with the judges, the childhood taunts that once threatened to quash her dreams of becoming a model were finally silenced.

Parents told their kids not to sit next to me

“As a child, I remember crying endlessly. I just felt dirty, with people wrongly assuming it was something they could catch from me,” Luissa remembers.

“It affected everything. Friendships, relationships. Parents would actually tell their kids not to sit next to me. That left me feeling like I was broken, not like a normal child.”

Having recently taken her Miss World Europe sash to the summit of Europe’s highest peak (Mount Elbrus in Russia) Luissa is focused on how she can continue to rid people of the ignorance that led to her being called a ‘leper’ and a ‘lizard’ at school.

Her ascent of Mount Elbrus, which stands at over 5,000 metres and claims an average of 26 lives each year, has raised more than £10,000 for The British Skin Foundation so far.

“What people don’t understand is that psoriasis is not contagious. Having a skin condition like psoriasis or eczema shouldn’t stop you from living your life and taking part in normal things.”

“Strangely enough, my modelling career really
started to take off when my condition was at its worst.”

Much like those experiences of cruelty from the children around her, psoriasis and eczema do stay with you for life. Currently, both are conditions that can only be managed, not cured.

60% of people in the UK have been affected by a skin condition at some point in their life. Issues with self-esteem are common, with some cases sadly leading to depression and even suicide.

Luissa, however, is determined to show others who also suffer from psoriasis and similar conditions that beauty isn’t binary. Her openness about how she manages her condition is all aimed at helping others to realise their potential and refuse to let something so normal hold them back.

“My modelling career, strangely enough, really started to take off when my condition was at its worst,” she explained.

“I was at university, so it had taken a long time for me to become truly comfortable. I used to cover up if I had a flare up, not wearing dresses or anything with short sleeves to try and hide it.”

Although it may have taken a long time, the support of her family and her confidence of her career going from strength to strength means covering up her psoriasis is a thing of the past.

“If I have an outbreak that covers my whole body, as I did at the Miss World Europe competition, I don’t really care. I’ll wear what I want anyway.”

Having been an ambassador for The British Skin Foundation for five years, Luissa feels her ability to positively influence others in her position is a big responsibility.

“Working with the charity enables me to share my story with a much wider audience. I call it ‘turning your worst days in to your best days’. Using my worst experiences to help others is something I really believe in.”

Even now, Luissa does still occasionally get that sinking feeling when being singled out by someone. But as she explains, it doesn’t always end up being a negative exchange.

“I had someone come up to me this summer while I was in France and ask, “Oh, what’s that on your elbow?’ That triggered that ‘here we go again’ feeling. I’m going to have to do the whole speech here. But they just said, ‘Oh that’s so cool! They’re your logo!’ It ended up being a nice experience, I wish more people were like that.”