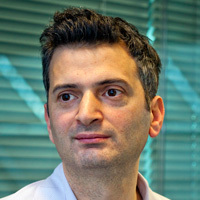 Traditional treatments for cancer – chemotherapy or bone marrow transplantation in patients with myeloma (blood cancer arising from plasma cells) are horrible, invasive procedures, says Dr Martin Pule, who is the clinical senior lecturer in the Department of Haematology at UCL Cancer Institute and honorary consultant in haematology at University College London Hospital.

“Because of the toxicity, these treatments come with a significant chance of long- term problems, even death. If we can replace that with another effective therapy, then that is a big deal for patients – and their families.”

Surgery, chemotherapy, and radiation therapy are currently the foundations of cancer treatment

For years, the foundations of cancer treatment have been surgery, chemotherapy, and radiation therapy. Over the last two decades, drugs that target specific cancer cells, for example, in breast cancer, have also forged a role as standard treatments. However, more recently, immunotherapy – therapies that enlist and strengthen the power of a patient’s immune system to attack tumours – has emerged. By far, the most exciting of these in terms of clinical development is CAR-T cell therapy.

Chemotherapy or bone marrow transplantation in patients with myeloma are horrible, invasive procedures.

Due to the inherent advantages for researchers of blood over solid cancers, for example access to samples, blood cancers lend themselves more easily to pioneering research. Among the most promising areas for clinicians today is the use of CAR-T therapy in multiple myeloma (a blood cancer arising from plasma cells). Thanks to the backing of some big players within the pharmaceutical industry, it is possible there will now be rapid commercial development of products within this therapy area. Once these become available, they give clinicians an important new treatment for myeloma.

Dr Pule says: “Just five or six years ago, CAR-T therapy was only an academic discipline, but once the commercial pharma companies took an interest, this made people think this new technology could really take off.” Encouraged by the evidence of survival and remission rates of between 40-60%, UK medicines watchdog, the National Institute of Health and Care (NICE), has also expressed support for these therapies; it describes CAR-T as having “potentially very substantial patient benefits”.

Approval of CAR-T therapies for use in the NHS could see this therapy in wide-spread use in the NHS within a few months. “In resistant disease, the results being generated by the clinical trials are amazing,” says Dr Pule. “This is the most important advance in the treatment of haematological cancer in a generation… their ability to induce long-term remission is remarkable.”