“For me, having Myeloma doesn’t mean life stops”, says Bob Munro. His story is one of pragmatism, intelligence and a will to contribute to raising Myeloma’s profile.

Bob Munro was 52, active, the owner of a relatively young business and was about to escape to the slopes to ski with friends. He went, despite feeling extraordinarily unwell.

A token beer at the airport to show willing, he sat out the first day’s skiing and tried to recouperate ahead of day two.

Having hauled his way to the top of the mountain, a friend asked whether he’d realised he had blood pouring from his nose.

“I’d never had nose bleeds before”

Bob was unaware his thinned blood was being caused by a disease he hadn’t yet heard of – myeloma.

“I was sweating profusely at night, and all an online website said was ‘go to the doctor’.”

He deteriorated further still and was eventually rushed to hospital back in the UK with severe pneumonia. Further tests revealed the myeloma diagnosis that would change his life. A CT scan unearthed ‘lesions on the bones’ all over his chest and pelvis, but Bob didn’t immediately make the link with cancer.

Bob remembers being told it was myeloma, along with phrases like ‘incurable’ and ‘improved treatments’ but the bombshell was ‘tumour’. Bob and his family had to confront the disease he had likely had for two years or more.

However, confront it he did.

“The consultant said ‘my firm advice is don’t google it’. The survival stats are shocking. My wife was there and it was all a bit tearful.”

But Bob still considers himself “lucky” having caught the disease at a relatively early stage.

“I call myself ‘lucky man’ because I got pneumonia and discovered it before I had major bone or kidney damage. Some people don’t find out until they pick up their grandchildren and their ribs shatter.”

His treatment didn’t start as he’d hoped, but he ensured he recorded what did or didn’t work.

“I wanted to do all I could to survive. That meant being responsible for my own treatment and taking an interest in it.”

When Bob’s treatment stopped working in 2016, he did his own research. He suggested a new treatment pathway to his consultant, which his private insurance was able to cover. 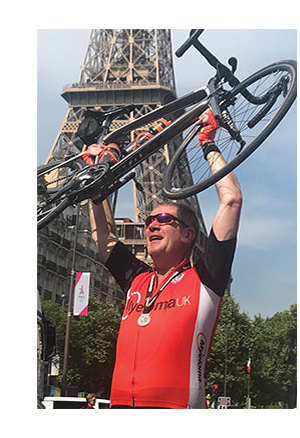 “I wanted to do all I could to survive”

“I’m very fortunate that I’m able to have a fantastic, active life, even with myeloma. But it’s vital to engage with your treatment and consultant.”

A summer spent recovering and watching the 2012 Tour de France sparked something in Bob. His new obsession with cycling provided an outlet for his competitive spirit and it has become a huge part of his own efforts to help Myeloma UK raise awareness of a disease 97% of people still haven’t heard of.

“As a relatively unknown cancer, Myeloma UK needed funds to help develop treaments and raise the awareness of GPs, who might only see four or five cases in their whole career.”

The answer: organise the first Myeloma UK Cycle from London to Paris that raised £330,000 in its first year in 2016.

“Spotting myeloma early is incredibly difficult for GPs, so raising awareness and introducing screening, along with more personalised treatments, will be vital for improving outcomes and survival.”

“Myeloma UK has an active drug development programme and acts as a powerful patient advocate to ensure newly approved drugs are made available through the NHS, so I know the funds we raise go directly to benefit patients”.

For now, he has the 2018 cycle ride to focus on, with Paris again firmly in his sights.

“As the police cleared the route to around the Arc de Triomphe for us that first  year, it was such a wonderful moment in my life. I can’t wait to do it again.”