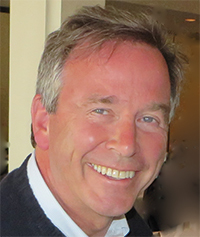 Chair of Medical Oncology at Barts

Trials with chimeric antigen receptors (CARs), which help repair the body’s own immune response, are delivering some ‘remarkable results’ in blood and other cancer treatments.

“The whole field of immunotherapy is coming to the fore,” says Professor John Gribben, Chair of Medical Oncology at Barts. “Cancer cells are very effective at switching off the body’s immune system. In the blood, T cells can lose their ability to recognise cancer cells as foreign, or there aren’t enough to fight the cancer, or they’re ‘exhausted’ and not functioning properly.”

Cancer cells are very effective at switching off the body’s immune system.

CAR-T cell therapy works by taking an antibody against a protein – usually CD19 – on the surface of the cancer cell from the patient and structuring it onto the patient’s own T cells. “When the antibody latches onto the CD19, it sends a signal that makes the T cell think it’s seeing an antigen, so it’s armed to react.”

T cells are taken from the patient and sent to a laboratory for the manufacture of CAR-T cells which are genetically engineered to multiply, then infused back into the patient’s body to recognise and kill cancer cells.

The treatment is not approved; it is still at trial stage, with most of the work being done in the USA, but it is delivering dramatic results, says Prof Gribben. He expects the U.S. Food and Drug Administration (FDA) to approve CAR-T cell therapy before Europe.

“The FDA has a ‘breakthrough therapy’ fast-track approval, which doesn’t exist here. There are three U.S. companies in particular, spinoffs of academic research, racing to get that. They’ll look to file in Europe after approval.”

We should refer to CAR-T cell studies ongoing in the UK, and Prof Gribben believes further trials here are imminent, by the end of this year or the beginning of next, subject to regulation.

There are “some real surprises in what’s been seen in the trials.

How Brexit might affect things is a concern. “The European plant for engineering T cells is in the Netherlands. It’s straightforward to send and receive T cells at the moment, but will they be held at Customs after Brexit? Will we need different licences? We’re opening clinical trials with no idea of the impact. Many of us are very nervous about the logistics.”

There are “some real surprises in what’s been seen in the trials. Acute lymphoblastic leukaemia (ALL) in children is highly curable with chemotherapy, but you’re out of options after that. CAR-T has delivered remarkable results. The studies are small, but reasonable numbers. A trial with 24 lymphoma patients showed two-thirds in complete remission.”

That depends on the type of cancer involved, says Prof Gribben. “With ALL, 90 per cent of kids can be cured with chemo – that’s a very high bar against going with an experimental treatment, no parent would contemplate it.

“You can’t just throw away a cure, but we have to think how to add to chemotherapy, how to work alongside it and eventually how to replace it. That will vary enormously from cancer to cancer.”