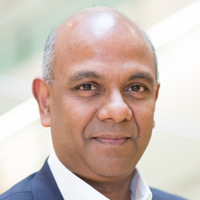 More patients could be spared the agony of repeat breast cancer operations by a new imaging technique that could be available soon. Here’s how.

Up to a fifth of those who have a breast cancer lump removed in the UK need a second operation to remove residual cancer that was missed the first time round. Now, a new imaging technique, which could be available within a few years, aims to reduce the numbers of repeat operations.

“However careful the surgeon, in a minority of lumpectomy operations some of the tumour is left behind, so a second operation is required. This is a global problem and in the UK happens 10-20% of the time,” says Professor Arnie Purushotham, Cancer Research UK Senior Clinical Advisor and Consultant Surgeon, Guy’s and St Thomas’ NHS Foundation Trust.

“Repeating the surgery means more pain and distress for the patient and their family and could increase complication rates. Sometimes this can also can mean that the second operation required may be a mastectomy.”

Tumours are rarely spherical. Usually they eccentrically-shaped and have ‘tentacles’ which reach into the surrounding tissue. Without a clear idea of the shape of the tumour and size and reach of the tentacles, ensuring complete removal can be hard.

“Surgeons use information from mammograms, ultrasound and sometimes MRI scans to get as accurate as possible three-dimensional assessment of the size and shape of the tumour before the operation. In theatre they remove the tumour and a surrounding ‘fringe’ of normal tissue, and X-ray it to check that the fringe completely surrounds the tumour,” says Purushotham. “This can sometimes be hard to see on a two-dimensional, black and white X-ray.”

A new solution to define tumours

Now, an emerging molecular imaging technology called Cerenkov Luminescence Imaging (CLI) could help make the edges of tumours clearer. Cerenkov luminescence is a light emitted from a radioactive isotope as it starts to decay, and Purushotham has been involved in the development of a new technique that can detect it.

The imaging machinery is designed to be used during the lumpectomy operation. Patients are injected with a radioactive tracer, the light from which can be detected by the imaging machine, thus highlighting the tumour more clearly.

“If you cannot see a full fringe of normal tissue completely surrounding the tumour, or the light from the tracer passes through the fringe, it is likely that some of the tumour has been left behind and the surgeon can rectify that on the spot,” Purushotham says. “This should mean that surgeons are more likely to catch the full extent of the tumour the first time and reduce the rate of re-excisions”

An initial study of the technology, carried out in 2016-17, used it to examine tumours already removed from 22 patients. “The tumours showed up as a different colour against the background of normal tissue, making it easier to see the extent of the tumour,” says Purushotham.

First-in-human trials in patients in 2019

The next first-in-human trials of the technology are scheduled for 2019, based in Guy’s Hospital, London.

“It should not take long for trials to show whether CLI is an improvement on existing methods, so if it proves to be helpful in reducing the need for second operations, it could be in clinical use within the next few years,” Purushotham says.

Moreover, if CLI is proven to be valuable in breast cancer lumpectomies, it could also prove useful in surgery for other solid cancers, for example in prostate, stomach, colo-rectal and lung cancer.