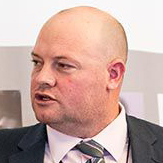 When Dean Walker had an accident at work, it felt like life was over. A roofer by trade and a keen water polo player, Dean’s accident left him in debilitating pain.

‘After the accident I remember lying on the ground. Every time I tried to stand up, I’d fall back over again. I was in so much pain,’ says Dean.

With injuries to his lower back, the next few years were marked by a constant round of doctor’s appointments, as Dean sought relief from the pain and a return to the life he’d had before the accident.

‘Everything stopped for me, including being able to be a proper dad to my kids,’ he says.

Breakthrough treatment for back pain

A breakthrough came when Dean checked into a Pain Management Centre. About to undergo an inpatient programme to help him adapt to living with pain, doctors suggested trialling a different type of spinal cord stimulation (SCS) called HF10 therapy.

“Delivering high-frequency, electrical impulses to the spinal cord and altering pain signals to the brain.”

Dean’s doctor was Adnan Al-Kaisy, a Consultant in Pain Medicine. ‘In the last decade, huge improvements have been made in our understanding of the neuropathology of pain, as well as in implantation techniques to help control it,’ he explains.

For the trial therapy, Dean was fitted with a temporary implant inside his back. Connected by leads to an external battery, the implant works by delivering high-frequency, electrical impulses to the spinal cord and altering pain signals to the brain ‘The therapy aims to reduce a patient’s pain levels by at least 50 per cent, to the point where functionality can be significantly restored,’ says Al-Kaisy.

‘The pain was completely gone’

To the delight of Dean and his doctors, the trial proved to be a great success.

‘I knew the device had worked straight away,’ says Dean, of the device in his back for which he has developed a level of familiarity and affection. ‘The pain was completely gone. The damage in my back was still there, but my brain wasn’t picking up the signals.’

The damage in my back was still there, but my brain wasn’t picking up the signals.

Although SCS has been used to treat chronic pain for the last 50 years, it is only with the advent of HF10, a high frequency stimulation, where electrical impulses are delivered to the spine 200 times faster than in standard stimulation, that real advances could be made.1

‘Before high frequency stimulation was available, we didn’t have a good option for treating patients with chronic back pain. With the availability of HF10, it has given us an approach to treat back pain for the better’ says Al-Kaisy.

The secret to Nevro’s HF10 success lies in its ability to quiet overactive neurons thereby inhibiting pain more effectively than was previously the case.1

One of the side-effects associated with traditional types of SCS is paresthesia, where a tingling sensation occurs at the site of the pain, caused by the electrical voltage from the implant.

‘Because of the speed at which the electrical charge is delivered in Nevro HF10, it is the first therapy where patients don’t feel tingling afterwards,’ says Al-Kaisy. While not all patients repond to SCS in the same way and there are some risks associates with HF10 that are similar to other minor surgeries including infection and surgery pain, the success of Dean’s trial meant he was suitable to have a permanent implant to be fitted.

According to Al-Kaisy, patients undergoing HF10 therapy frequently see an improvement in their condition.1 ‘Patients find they need less and less stimulation as the function of the spine improves and the muscles and ligaments become more flexible, and exercise becomes possible; in my experience, 70 per cent are able to return to work,’ he says.

After having his device fitted, Dean describes how he not only took up a new job, which sees him travelling round the country, but he was also able to take up swimming and found he could do more with his kids. Most importantly of all, he felt his sense of worth return.

After having his device fitted, Dean was able to take up swimming and found he could do more with his kids.

Despite the efficacy of Nevro HF10, fewer implants are fitted in the UK than in many other countries. The reasons for this, says Al-Kaisy, include a lack of awareness among General Practicioners and a shortage of specialists.

The Medical Technology Group, a coalition of clinical specialists, patients groups and industry, recently called on government to speed up the introduction of technologies such as HF10, so that more lives could be improved and the economic burden of back pain on the NHS reduced.

‘No other treatment has seen the same reduction in chronic back pain to date1,’ says Al-Kaisy. ‘It means patients make less visits to the doctor and start to reduce their medication. It’s a very cost-effective treatment and saving the NHS money in the long-run.’

For doctors like Dr Al-Kaisy, the impetus is to be able to provide more patients like Dean with effective, long-term treatment.

‘There are millions with chronic back pain in the UK who are suffering in silence or reliant on medication,’ says Al-Kaisy. ‘We hope to be able to extend this treatment to help those in pain, so they can return to being productive members of the community.’