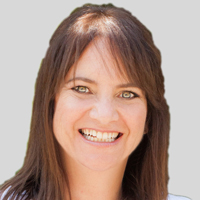 CEO and founder of the Latte Lounge

I was a 43 year old, happily married mum of four healthy kids with a lovely job, so I couldn’t understand why I would wake up each morning feeling really low and tired.

I couldn’t explain it, I just didn’t feel right. I just felt empty, numb and slow. I felt like I was walking in a fog, through thick mud, slightly disconnected. I felt teary, anxious and not sure what my purpose was in life any more.

I didn’t have the energy to cook or to look after the house, and even making simple decisions was a huge challenge for me. I didn’t want to see my friends or family anymore and I couldn’t find humour in anything that I used to find funny. I just felt empty. I started to comfort eat as a way of self medicating to try and ‘feel’ better – but this just made me put on a lot of weight, which in turn made me very self-conscious, and I became a hermit who never wanted to go out.  I didn’t even want to speak to anyone on the phone as it was too much of an effort.

I put the exhaustion and low mood down to being a mum of four kids, juggling family and home life with work and thought maybe I just couldn’t ‘have it all’.

I started to get very heavy periods which prevented me from leaving the house on those days, and the tiredness was at a level I had never experienced before. I spent most of my day asleep on the couch.  I felt breathless too and started having heart palpitations – I didn’t realise that I was becoming seriously anaemic, which was the cause of these new symptoms and instead convinced myself that I was suffering from either ME or having a heart attack.

I went to the doctor to say how I was feeling, however after five minutes of talking to a young male doctor, he misdiagnosed me with depression, giving me a prescription for anti depressants.

A month later I didn’t feel any different, if anything I felt worse. I was just numb, trying to get on with life but not really living.

I started to forget words, I couldn’t remember where I’d left things, and I started to think that perhaps I was suffering with early alzeimers. I felt embaressed of the woman I had become as I had no obvious reason for being like this.

On my next visit to the doctor, he said it was probably stress from juggling so many different things, and he suggested I give up work for a while if it was possible.

So I decided to leave my job and give myself some time off, to try and take things a bit easier.

At my third GP visit I was sent off for heart tests which came back normal.

On my fourth GP visit I was still feeling no better and now had terrible backache which the doctor said was because I was overweight and should take up Pilates. He added that it was probably all in my mind, and asked me if I’d also like to go for some psychotherapy.

I felt utter despair; what was wrong with me? Why couldn’t I enjoy my life? Four years being tested for everything and still feeling no better

Visting a gynaecologist finally lead to a breakthrough

I eventually opened up to my father who is a breast cancer professor, telling him how I’d been feeling and it was the first time anyone had ever suggested that it may be hormonal. He suggested I go and see a gynaecologist who specialised in menopause.

After a blood test, and going through a full history of my symptoms over the last four years, the gynaecologist said one word: PERIMENOPAUSE.

She explained that my oestrogen levels were on the floor, and were the entire reason I was feeling all these things. She reassured me that nothing was wrong with me, suggested I have a coil fitted to stop the bleeding, and told me I’d feel like a new woman after a month on hormone replacement therapy (HRT).

And she was right. Four weeks later, my mood had lifted significantly, my energy levels had peaked, my memory returned, I could think clearly and make normal decisions. The anxiety and palpitations stopped, and I suddenly realised I was happy and really enjoying my life again. It was the first time in years that I could remember laughing. My husband said he’d got his wife back and the kids, their mum.

That night, as I lay on my bed crying my eyes out in relief, I turned to Facebook to see if anyone else could relate to these last four years of perimenopausal hell. All the women’s groups I could find were for mums with young babies, comparing notes on nappy rash and buggies. So I decided to set up my own group.

I wanted it to feel like an online coffee shop for midlife women, as I’ve always found chatting with a friend over a coffee is the solution to most of life’s problems.

Today, after two and a half years, we have over 15,000 women across 69 countries in the world.

I’ve since set up a website, www.lattelounge.co, put together a medical advisory committee, and have more than 30 contributors to help support other women, in all areas of midlife – so that no one ever needs to feel alone, confused, lost, or like they’re going mad.

Doctors need better training to understand and spot perimenopause symptoms, and women need to be educated from an early age on what the word perimenopause means.

After all, I wasn’t having hot flushes, and I still had periods. But the ten years before menopause, as oestrogen levels start to drop, can create symptoms that are the same as or even worse than the menopause.

I feel angry that I lost four precious years of my life, and I want my forum to be the go-to place for all things mid-life, so we can be a force for good. We can campaign for better education and awareness; provide up to date, evidence-based information; and we can support and signpost women correctly so they get the help they need, when they need it.