That changed after his baby daughter Margherita (Dita), who already had severe eczema, ate a piece of fish and went into anaphylactic shock while the family were on holiday in rural France.

Giorgio’s wife Plaxy says: “…there was Margherita with her head the size of a football and her lips swelled out, drooling and not breathing properly.” The family flagged down a passing fire engine – Plaxy still barefoot and in a bikini. Dita was gasping for breath, but they reached hospital in time for Dita to have a life-saving adrenaline jab.

Tests later showed that she was allergic to over 800 foods, including fish, nuts, tomatoes, strawberries, peppers, chilli, paprika and eggs. “Before she was tested I had taken pride in preparing the finest Italian tomatoes her – in fact I was unknowingly poisoning her,” says Giorgio. “People with acute allergies live in fear. Dita became frightened of even the smell of food.” 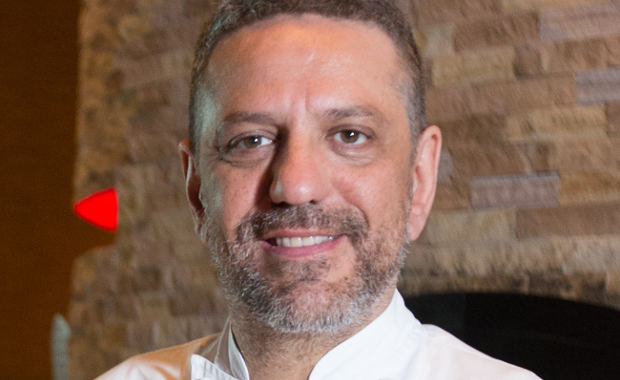 He now advocates allergy testing for people with eczema, because there can be interrelation between different allergies. “Early detection and treatment such as immunotherapy can help or even allow prevention,” he says.

Giorgio ensured Dita’s diet was safe but as ‘normal’ as possible. “People with food allergies face social stigma because their diet is different,” says Giorgio. “When Dita was at school we got school lunch menus and sent in exactly the same dishes – right down to the same size chips – but using safe foods. If they had fish fingers, she’d have ham fingers.”

Giorgio’s allergy awareness extends to his business. “All my staff get food allergy training and food for customers with allergies is prepared in a separate kitchen that is sterilised between uses,” he says. He welcomes new rules extending allergen labelling to restaurant dishes. “Chefs must accept that people with food allergies need to know what is in their food,” he says. “They should not have to take risks every time they eat out.”

Catering for food allergies is extra work – but rewarding. “Some time ago a family came in to our restaurant to celebrate their little girl’s birthday. She had a nut allergy and we were able to make her a meal, including a birthday cake, so she could eat along with everyone else. It was a very happy day for me.”

And Dita? She is now 19 and at university. “She now sees food as a pleasure,” says Giorgio. “She cooks for herself, and within her diet, is an adventurous eater. It’s a joy to see.”