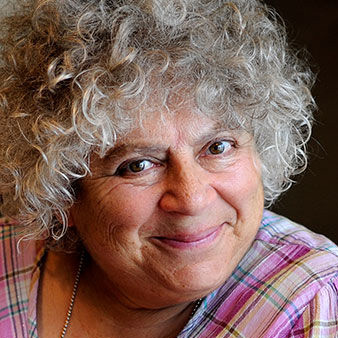 Miriam Margolyes has an attitude to life that many would envy. Making the most of the one life she has is made harder by arthritis, but she refuses to let it put out her fire.

Three years ago, celebrated actress Miriam Margolyes underwent surgery to replace her troublesome left knee. The pain had got to a stage where she was trying to avoid moving altogether.

Osteoarthritis has made getting older more stressful than she’d hoped, often battling pain in her legs, hands and back. Her weight is also something she admits she struggles with.

“I thought I could carry on being overweight and getting through, but it’s not quite like that,” she said.

“It limits you and diminishes you. It’s been more of a struggle to remain me than I thought it would be.”

However, her inextinguishable passion for life is coupled with an underlying determination not to let her arthritis halt an acting career that continues to flourish. Albeit frustatingly late for Margolyes’ liking.

Exercise has to suit you and your needs

Margolyes says exercise is vital in managing her arthritis, enabling her to live the life she wishes to lead.

She swims and has recently invested in a brand new exercise bike, while personal training sessions contribute to staying as mobile as she can. Knowing her limits has become increasingly important.

“When you get older, things start failing you. One of the first things to go is my bladder,” she started.

“I used to walk a lot until about a year and a half ago, but I’m fearful of going on long walks now in case I p**s myself! With my bike I can just hop off and go to the loo.”

Making the most of your mobility

Margolyes spoke about not letting her condition stop her, but regrets that certain things are now beyond her.

“I have a show called ‘Dickens’ Women’. One of the characters, Mrs Mowcher, requires me to crouch and bend my knees for around 12 minutes. I just can’t do it any more.”

Margolyes splits her time between London, Australia and Tuscany and you’d be forgiven for presuming trips to warmer climes were to tame her arthritis.

“No, it’s because I’m greedy and I want everything,” she joked.

“If I could have three lives, I’d ask for three lives. But I’ve only got one and I want to make every moment count.”