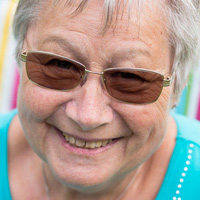 Exercise classes may be of benefit to anyone with arthritis. We talk to Miriam Smith, who has recently started attending a class which, she believes, could be improving her flexibility.

Miriam Smith was diagnosed with arthritis in her knees around 16 years ago, when she was 60. At first, she tried to shrug it off and simply get on with life. Over time, however, she couldn’t ignore it any more.

“The first time I noticed I had a problem was when I went to a party and danced all night — and the next morning I could hardly move,” remembers Miriam. “Then stairs became an issue: I’d have to come down one foot at a time.” Walking down slopes was also painful.

No pattern to symptoms

Miriam doesn’t want knee replacement surgery so is looking for other ways to improve her condition. She doesn’t like using medication, but has been taking paracetamol as a painkiller when necessary. She’s had cortisone injections — but found their benefits wore off too quickly — and also tried acupuncture. “Unfortunately acupuncture didn’t work for me,” she says. “But you name it, I’ve done it!”

Frustratingly, there doesn’t seem to be a pattern to her symptoms, so it’s a difficult condition to predict. Sometimes Miriam finds that going out for a walk with the dog will ease the pain; at other times, it exacerbates it. Her arthritis can also affect her sleep. “And when I first get out of bed it’s even difficult to bend my legs,” she says.

Miriam doesn’t allow the pain to stop her from leaving the house; but she has had to give up certain hobbies she once enjoyed. “I used to love line dancing,” she says, “but that’s an activity where you have to twist your knees — and that became too painful, so I had to stop.”

Around 10 years ago, Miriam began visiting a chiropractor who eventually referred her to a physiotherapist. “The exercises the physio gives me doesn’t make the condition better, but it does ease the symptoms slightly,” says Miriam. “She’ll massage my knees and apply heat and cold to them.”

Effects of an exercise class

Then around six weeks ago, a friend told Miriam about Age UK Oxfordshire’s hour-long Strength & Balance exercise classes at her local village hall. The classes are run every week by Level 4 Postural Stability Instructors, and are attended by men and women of all abilities.

“It’s still early days, but I think the classes have been beneficial,” she says. “It’s keeping me more flexible. The instructor demonstrates exercises to loosen up the neck, shoulders, arms, core and legs; and also how to keep your balance, because as you get older that can begin to be a problem.”

Exercises can be done either standing up or sitting down. “The instructor is very good, very attentive, and if she sees someone struggling she’s able to give them an alternative,” says Miriam.

The classes have been a boost to Miriam’s social life, too. “There were around 20 of us the other day,” she says. “It’s good to meet up and have a chat. My advice to anyone thinking about doing an exercise class is to go along and give it a try.”