Phil Davies is a young, family man who enjoys being active — so a diagnosis of rheumatoid arthritis was devastating. He reveals how he and his family have coped with his condition.

When Phil Davies was diagnosed with rheumatoid arthritis in his mid-twenties, it was a scary time. “I didn’t know anything about the condition,” he says. “I was pleased to find out what the problem was and to get a treatment plan, but I was heartbroken to discover there was no cure because I’d always been active. I was worried about the impact it would have on the rest of my life.”

Phil, now 31, was continually visiting A&E with excruciating shoulder pain. “But I’d always be told there was nothing wrong with me. It was only when my GP finally referred me to a rheumatology department that the diagnosis was given.”

Rheumatoid arthritis, an autoimmune disease that causes painful, swollen joints and stiffness, can affect any part of the body. “Thankfully, I’m more or less OK on a day-to-day basis,” says Phil. “But I do get flare ups once a month on average. I’ve had them in my jaw, shoulders, knees, hips, toes… even my collar bone. I’ll notice a pain that gets progressively worse, then go to bed, get two or three hours sleep and wake up in agony, not being able to move a particular joint.” He can only take painkillers and wait for things to improve.

It helps that Phil, who works in the heavy chemicals industry, has a supportive employer. “When I saw my job advertised four-and-a-half years ago, I nearly didn’t apply for it,” he says. “I was worried I’d fail the medical. But I was on established medication and my health was relatively stable, so I did apply — and I got it. I told my manager: ‘If I have to go to the doctor’s once a month, this is why.’ The company’s support has made a huge difference to me, because I don’t like taking time off work for illness.”

“I physically couldn’t pick up my children”

Phil’s condition has also affected his family life. He and his wife have two children, aged five and two; and in the early days of his diagnosis Phil couldn’t pick them up, feed them or change their nappies. He was told to give up all contact sports and take up swimming or cycling instead. He became miserable; so, against medical advice, he started playing football — and loved it.

His rheumatologist has since given Phil the green light to play football — but he hasn’t told his teammates about his condition. “I don’t want the coach leaving me on the bench,” he admits. Because arthritis has badly affected his feet, Phil has an issue finding boots that fit. “I’d love to know if any top tier footballers have the same problem,” he says. 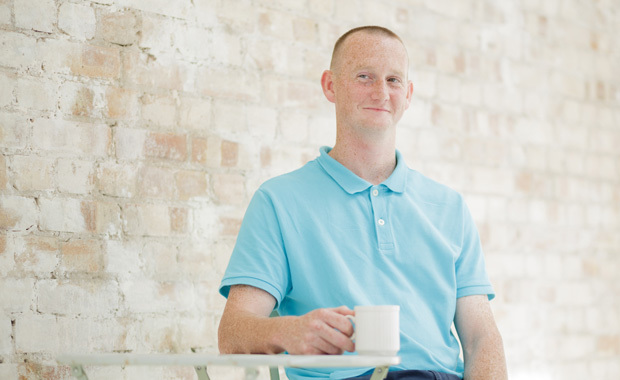 If he’s ever feeling sorry for himself, Phil’s wife tends to snap him out of it. “That approach works well for me,” he says. He does agree it can be frustrating when people say to him: ‘You have arthritis? Oh, my nan has that.’

“It’s not a condition people understand,” says Phil. “So, I have to make a decision to either nod politely and explain to them that, actually, rheumatoid arthritis is not the same as osteoarthritis. People just don’t know about it.”