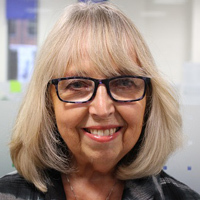 This is an exciting time for research into rheumatoid arthritis, both at home and internationally. The results could redefine how patients with the disease are treated.

Because rheumatoid arthritis is a syndrome rather than a single disease, there isn’t a ‘one-size-fits-all’ treatment.

She has lived with the condition for over 35 years and was first diagnosed when disease-modifying anti-rheumatic drugs (DMARD) — an important intervention for people with RA — were only given to those who had become extremely ill or disabled.

“My rheumatoid arthritis was very aggressive,” says Bosworth. “But it was three years or more before I was finally given the disease-modifying drugs that, today, are routinely given immediately on diagnosis. As a result, my RA wasn’t controlled properly, and I sustained a lot of irreversible damage.”

I am soon to have my 20th rheumatoid-arthritis related operation

Indeed, Bosworth has undergone extensive surgery to counter the effects of rheumatoid arthritis over the years, including replacement knees, hips, elbows, ankles and a partially fused neck. The disease is now affecting her vision, too; so, in July, she will have her 20th operation, this time to improve the sight in her left eye.

Despite the destructive toll RA has taken on her body, Bosworth is optimistic about the direction of future treatment. Currently, therapies may include painkillers, anti-inflammatories (steroids) or disease-modifying drugs such as methotrexate — the ‘gold standard’ of DMARD medication, initially used to treat leukemia and other forms of cancer.

“Because rheumatoid arthritis is a syndrome rather than a single disease, there isn’t a ‘one-size-fits-all’ treatment,” says Bosworth. “If disease-modifying drugs don’t work for an individual after a period of time — and they have a disease activity score (DAS) greater than 5.1, which is the criteria laid down by NICE (National Institute for Health and Care Excellence) — then they may be prescribed a biologic or biosimilar therapy.

Without treatment I’d be in a wheelchair permanently by now

Biologics have to be delivered by injection or influsion drip due to the size of the molecule, and they have revolutionised the field of rheumatology since they were first introduced in the UK at the end of the 1990s.

“For people like me, who didn’t respond to disease-modifying drugs, biologics have been a saviour,” says Bosworth. “There’s no way I’d be able to do my job or work the hours I do without them. I’d be permanently in a wheelchair.”

Unfortunately, this type of medication is very expensive, which is why its prescription is restricted. However, when an original biologic drug reaches the end of its patent, other manufacturers are allowed to make similar versions — known as ‘biosimilars’ — which have been shown to be similarly effective and safe as the original biologic but much less costly. “We now have a number of biosimilar drugs on the market and more are coming on stream in October,” says Bosworth. “This is changing the market landscape for RA treatment.” Other new and innovative therapies recently available in the UK include JAK inhibitors, which are small-molecule therapies that can be taken by mouth.

The importance of personalised therapies

Bosworth believes this is an interesting time for RA treatment research, both at home and internationally. For example, she hopes that ongoing research into biomarkers — a biological molecule found in blood and other body fluids, or tissues — will enable individual RA patients to have their disease targeted with personalised therapies in the future.

“If a patient doesn’t receive treatment that works for them, it wastes time (as they would usually wait 3 months to see if the drug was starting to work) — which means they can continue to deteriorate and sustain damage,” she says. “So, we need to be able to quickly identify which drug will best suit each RA patient and then tailor treatment to the individual’s disease profile, just like we do in cancer treatment.”

Ultimately, Bosworth hopes that a cure will be found for rheumatoid arthritis; or, at least, a way to prevent it from really getting going. “For example, an antibody test can identify people who haven’t yet developed RA symptoms but might be more likely to develop it at some point in their life due to family history; and  trials are under way to see if biologics can stop the disease taking hold in these individuals who are in the pre-clinical stages of the disease. There is also research going on into other target areas of the immune system and so It’s an exciting time and gives me good reason to be positive about the future.”

NRAS is ‘the voice’ of people affected by Rheumatoid Arthritis (RA) and the only UK charity devoted specifically to the condition. Find out more at nras.org.uk, call 0800 298 7650 or email [email protected]