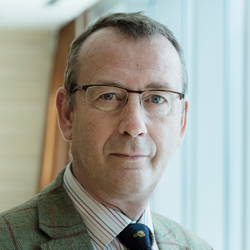 Western diets are causing an epidemic of Type 2 diabetes, and UK research expertise is in demand more than ever. Exciting breakthroughs in the field are being made — with more on the horizon.

There has been an explosion of Type 2 diabetes cases in recent years, says Steve Bain, Professor in Medicine (Diabetes) at Swansea University Medical School.

Wales is particularly affected, with the highest prevalence of diabetes in the UK at 7.4% of the population.

In the UK as a whole, 6% of the population are living with the condition. “But it’s not just happening here,” says Professor Bain. “The US also has extremely high levels of Type 2 diabetes, and countries such as India, Iran and Saudi Arabia — which are beginning to adopt western diets — are seeing a rise in childhood obesity, leading to early onset Type 2 diabetes.”

On the plus side, the UK does well in the field of Type 1 and Type 2 diabetes research. “Many clinical trials take place in this country,” says Professor Bain. “And in the last two or three years, the UK has been an early adopter of new medicines and technologies.”

Certainly, big breakthroughs have been benefiting people with Type 2 which, in the medium- to long-term, could help take some pressure off an overcrowded NHS. “UK-international diabetes studies are under way, led from Swansea and Cardiff,” explains Professor Bain. “For example, there’s activity around improved screening for diabetic retinopathy, and a big focus on exercise and diabetes. Plus, we’ve been involved in international studies introducing new medications for Type 2 diabetes.”

India, Iran and Saudi Arabia — which are beginning to adopt western diets — are seeing a rise in childhood obesity, leading to early onset Type 2.

That’s critical because, 20 years ago, there were only three treatments for Type 2 diabetes, two of which actually caused weight gain. However, today’s therapies — both oral and injectable — promote weight and blood pressure reduction while reducing the risk of heart disease and stroke for people with the condition.

“Some patients who had to inject insulin up to four times a day can now have a once weekly injection of medicine,” says Professor Bain. “That injection is now available in a trial setting as a once-daily tablet, which was recently given approval in the US and is currently going through European regulatory approvals. Also, there are interesting studies into immune therapy for patients with Type 1 diabetes. So, things are moving rapidly.”

Swansea University Medical School is also leading the way in training the workforce required to deal with the growing number of people living with diabetes in the UK. Their Master’s course in Diabetes Practice has been specifically designed for healthcare professionals wanting to specialise in the field of diabetes. To find out more visit the course page here.