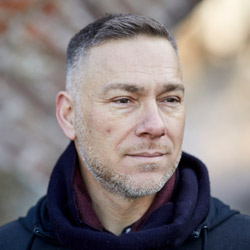 Tim Newman was diagnosed with Type 1 Diabetes at 14 years old. Despite managing his diabetes, he had to face complications caused by diabetes, including foot ulcers.

Tim Newman, 49 years old, is a company director. His journey with diabetes started on his 14th birthday. Despite doing his best to keep active and manage his diabetes, it caused him to develop complications, including foot ulcers.

Between 2011 and 2018, Tim developed six diabetes-related foot ulcers (DFU). His first severe episode with DFU occurred in 2012, following training for a 10k charity race Tim joined after his uncle was diagnosed with cancer.

He damaged two of the toes on his right foot but didn’t notice due to the loss of sensation in his feet caused by diabetes, commonly known as neuropathy. The ulcer became infected, the infection spread to the bone, and ultimately caused him to lose a toe to amputation.

Having a DFU massively impacts patients’ quality of life. Treatment includes having to off-load all the weight on the foot, making any activity more challenging.

An ulcer from ill-fitting shoes saw Tim in intensive care

Tim’s more recent DFU was life-threatening. After wearing ill-fitting shoes at a friend’s wedding, he developed another foot ulcer. This time, he ended up in the intensive care unit, with life-threatening sepsis and pneumonia in October 2017. He was 47 years old, and the medical staff was not sure he was going to survive.

A week after being told he wouldn’t survive, Tim was offered a new treatment. The infection cleared, and he was given a new type of interactive dressing. He says he could see improvement happening in the wound right away, with the skin around it looking healthier and an apparent better blood supply in the wound bed. The size of the ulcer decreased more and more rapidly, until healing completely.

Experiencing that progress had a tremendous impact on Tim’s quality of life. He shares: “[The new dressing] did not require any additional padding on the foot and I could wear normal shoes. It didn’t need changing as regularly as the previous dressings, yet the results were more noticeable”. Keeping active is important to Tim, and he was able to resume his usual activities, such as walking his husky dog, Sika.

The dressing could save NHS time and money

Tim also believes the technology could have a positive impact, not only on patients like him, but also on the NHS as a whole. He says: “There was an obvious time and cost saving for the NHS. I had fewer hospital and community podiatry appointments. UrgoStart would appear to be a ‘no brainer’ based on my experience when it came to rapid recovery and therefore cost effectiveness. It’s made a huge difference to my life, and I certainly hope it will be the same for many others now that this great product is available.”

Tim was given UrgoStart dressing, which was still undergoing a clinical trial at the time. In January 2019, interactive wound dressing range UrgoStart was recommended by the National Institute for Health and Care Excellence (NICE) for treating diabetes-related foot ulcers and venous leg ulcers.