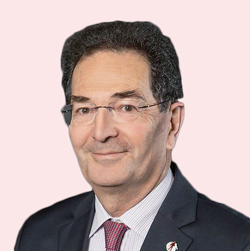 President, The World Federation of Haemophilia

The World Federation of Hemophilia (WFH) has been improving care for people with bleeding disorders around the world for the past 50 years. Treatment, care and support for people with bleeding disorders has improved dramatically over this time. Despite improvements, access to quality care continues to be a challenge for many patients around the world. We continue to work to overcome these challenges and look optimistically to the future as we enter a new era of treatments.

1. How has the landscape of haemophilia changed over the last 20 years in terms of diagnosis and treatment?

Identification and diagnosis of patients with all bleeding disorders has improved dramatically over the past 20 years. In 1999, approximately 75,000 people with haemophilia (PWH) were identified. Today, this number has more than doubled, with almost 200,000 PWH identified.

Although these are impressive gains, this number represents only 40% of the expected number of PWH, demonstrating the work that still needs to be done.

Along with the increase in number of PWH identified, the global treatment of PWH has also improved over the past 20 years.

Consumption of FVIII, the main treatment for haemophilia, has increased globally over time. However, these improvements are not equally distributed around the world.

While consumption among upper-income countries has more than doubled, now exceeding 7 IU/capita, countries in the low-income group are trailing far behind, with an average of 0.105 IU/capita.

If you consider the latest recommendation of the Council of Europe that 4 IU/capita should be the minimum in any given country, you realise how dramatic the situation is for patients living in low and middle income countries.

2. What are the key challenges in diagnosing haemophilia?

Identification and diagnosis have reached a satisfactory level in North America, Western Europe, Japan and Australasia, but that is far from being the case in other parts of the world.

The cost of treatment is so high that low and middle-income countries can hardly afford purchasing and procuring treatments for patients.

The two main reasons for the low levels of diagnosis are lack of education and laboratory testing capabilities. The WFH is working hard to increase the knowledge of haemophilia and the ability to make correct diagnoses, by providing training around the world.

3. How accessible are treatments to patients? Are current treatments available to everyone?

There is an imbalance in the distribution of clotting factor consumption between geographical regions of the world. Access and affordability of care is a real challenge for haemophilia patients in most parts of the world.

Too often, haemophilia is totally absent from ministry of health budgets. Also, the cost of treatment is so high that low- and middle-income countries can hardly afford purchasing and procuring treatments for patients.

The World Federation of Hemophilia has developed a Humanitarian Aid programme. Thanks to predictable and sustainable donations from some pharmaceutical companies we have been able to help patients living in poor countries perform orthopaedic surgeries and initiate prophylaxis to young children.

4. What does the future hold for haemophilia? What kind of game-changer could or should be on the horizon?

Scientists and researchers have made fantastic progress in terms of product quality and safety and, very soon, gene therapy is expected to be licensed and accessible to some patients.

Today, a person with haemophilia can enjoy a quality of life very similar to the average population, can get access to education and can have a similar professional and family life, if properly diagnosed and taken care of in their very early age.

The future could be bright if:
a. All governments and especially those from low- and medium-income countries include haemophilia into their health priorities, invest in education, identification and diagnosis
b. Pharmaceutical companies significantly increase their production of clotting factors and gene therapy is being proposed to a maximum number of patients