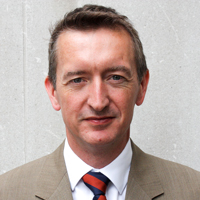 Known as the ‘living drug’ that brings hope to patients with terminal cancer, CAR-T therapy is the most exciting development in cancer treatment in decades.

The development of CAR-T began in the late 1970s, but it is only now, almost 40 years later, that it is becoming available in treatment.

The therapy takes its name from white blood cells, called T cells, which are harvested from the patient and reprogrammed to recognise specific cancer cells. Once the modified cells are put back into the patient, they hunt down and kill the cancer cells.

This year saw the first children and adults with blood cancer treated with CAR-T on the NHS in England. Among them was Mike Simpson, from Durham, who was diagnosed with an aggressive blood cancer in 2015. Despite two gruelling bouts of chemotherapy, the cancer returned and, by the end of last year, he was told he had little time left. But after starting treatment with this revolutionary new therapy in February, Mr Simpson is already back home, telling the media that he is looking forward to the future with hope.

Sadly, CAR-T doesn’t work for everyone who receives it. People can experience serious and potentially fatal side effects, which is one reason why this treatment is currently only available at hospitals with the expertise and facilities to manage them. Mr Simpson became unwell a few days after the infusion and spent almost a week in intensive care. Happily, this is an issue that is being addressed by ongoing research.

Although it is already making an impact, CAR-T is still very new, which means that, currently, only a few hundred patients will benefit in the next two or three years.

CAR-T licensed to treat a small number of cancers

There are more than 100 types of blood cancer, but CAR-T is currently licensed to treat just three types: childhood acute lymphoblastic leukaemia, diffuse large B-cell lymphoma and primary mediastinal large B-Cell lymphoma. And CAR-T is only available for the minority of people who don’t respond well to existing proven treatments.

However, with some 20 clinical trials and research studies for promising new CAR-T therapies in the UK alone, some of which are funded by Bloodwise, it is likely that we are only beginning to see the benefits that CAR-T therapy can bring to a growing range of blood cancers, and perhaps to some other types of cancer.

Mr Simpson is enjoying spending time with his young grandchildren and is even considering a return to work. “I’m incredibly grateful for being given the opportunity to have this therapy, as I know it’s a costly, one-time treatment. I describe it as my L’Oreal treatment… because I’m worth it,” he joked.