After a car crash left her in a wheelchair, young Issy Bailey used her sporting abilities within rehab to become a Paralympic target shooter who’s now competing worldwide.

Most of Issy’s rehab and her introduction to shooting was at Stoke Mandeville Hospital, where sports are a key part of therapy.

Sport as part of rehab therapy

“I cannot praise the physiotherapists there enough – they told me everything was possible, all doors were still open to me,” says Issy, who has graduated in English Literature at Exeter University since the accident as well as competing at the Rio Paralympics. “That’s important when you feel so weak. Things like getting yourself sitting up – the core effort, the balance – is absolutely draining at first.”

Be patient with your body – it takes years to feel in control; rehab doesn’t end when you leave hospital.

A keen hockey player before the accident, Issy has since competed target shooting in international championships in several countries, and is just back from winning a gold and a silver in the US Nationals.

She’s now back in training and aiming for the Paralympics in Tokyo in 2020, and is looking forward to a holiday in New Zealand later this year. 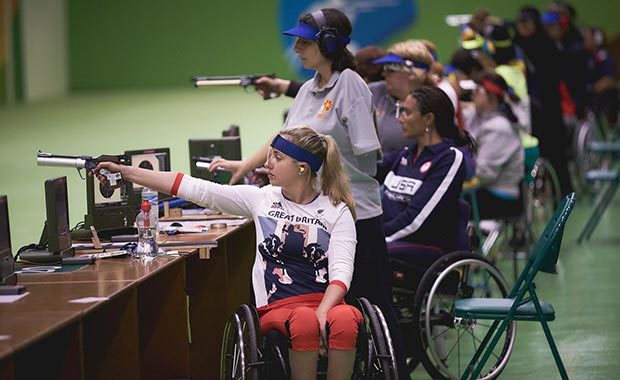 Issy’s advice to others

For others facing lengthy recovery, she says, “Be patient with your body – it takes years to feel you’re in control again. Rehab doesn’t end when you leave hospital, there’s a whole world to adapt to in terms of your home, your car, everything. Keep working at it, keep adapting. It’s a cliché, but you really can get through anything.”

She also urges anyone who gets the chance to use an exoskeletal device to do so. “It’s not going to make you walk, but it’s a really good tool that achieves several physiotherapy goals in one workout, and it’s very motivational. It helps to keep everything going, it keeps your body remembering functions. I use one and I absolutely love it.”